Inspiration and Ideas from Leaders in Clean Energy

A couple weeks ago, I had the opportunity to join a group of municipal staff from cities and towns across the Northeast (from Quincy, Massachusetts, to Providence, Rhode Island, to Philadelphia, Pennsylvania, and more) at a workshop focused on sharing ideas and discussing opportunities related to clean energy. Barr sponsored the gathering as an extension of our new Clean Energy strategies—in particular, our efforts to foster peer-to-peer learning and to advance solutions through local leadership.

The workshop was part of a larger conference, “Building Energy Boston 2016,” held in Boston’s Seaport district and hosted by the Northeast Sustainable Energy Association. Our session focused on a framework articulated by the Carbon Neutral Cities Alliance to transform (i.e., deeply de-carbonize) energy, transportation, and other energy-intensive current systems in cities.

Gustaf Landahl from the City of Stockholm and Susanne Rasmussen from the City of Cambridge led the discussion, starting with highlights from each of their city’s plans—including Stockholm’s Fossil Fuel-Free Roadmap and Cambridge’s Net Zero Energy Action Plan. Both emphasized the importance of adapting their approaches to different local contexts. To date, Stockholm has reduced fossil fuel use for both heating and electricity to less than 20%. The graph below shows the decreasing trajectory of the city’s overall emissions against 2040 goals (originally 2050) since 1990. 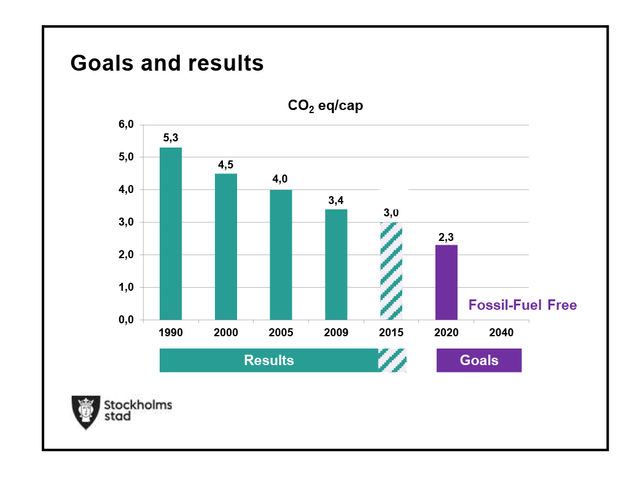 Moreover, between 1993 and 2013, the Stockholm region’s economy grew by 41% while greenhouse gas emissions decreased by 35%. Landahl attributed these reductions to a number of new policies and approaches (not any one solution) that substantially reduce energy waste, increase electrification, and boost renewable energy. Several implementation highlights include purchasing renewable electricity from hydro and wind sources for the train system, increasing energy efficiency significantly in new and existing buildings, converting from oil heating to heat pumps and widespread district-energy systems, and replacing fossil fuels with biogas and biofuels. Planning efforts in building, transportation, waste, and other sectors have also been important.

The City of Cambridge is in an earlier stage than Stockholm, having only recently completed an action plan to get to net-zero emissions from buildings. So Rasmussen’s remarks focused on the process to create that plan. We heard how the City’s attention to citizen feedback and broader, evolving trends added urgency to the process (e.g., business-as-usual would lead to more than a doubling of emissions in Kendall Square alone) and helped propel the creation of a clear goal. The action plan lays out steps to reduce energy use in buildings, require new construction to be less carbon-intensive, provide options to invest in a net-zero community, replace fossil fuels with low-carbon energy, offer industry training, and encourage community involvement. 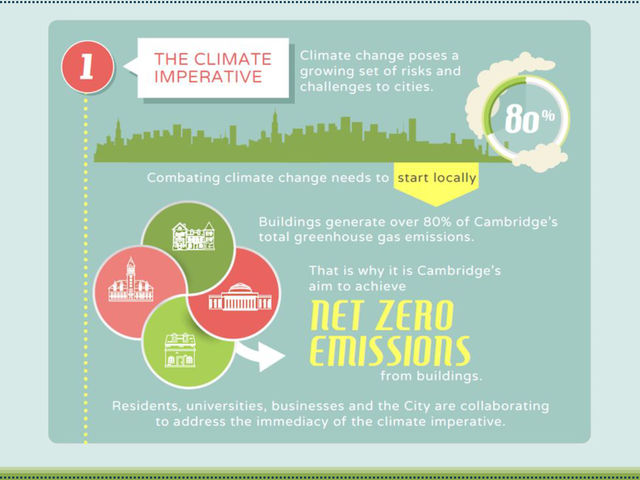 After the workshop, I reached out to a few of the participants to find out what they took away as key lessons from the day. They noted how important and inspiring it was for them to engage directly with peers working on similar issues. What also stood out was the importance of starting with goals and vision. I’ve asked some of the participants to share their reflections in the comments section below.

It was a terrific day, and I felt fortunate to be there—learning alongside cities demonstrating leadership on climate and advancing real solutions for clean energy.