Vivien Li is a nationally recognized waterfront expert, most recently serving as the President and CEO of Riverlife, where she worked with riverfront property owners to ensure public access, public open spaces, and riverfront amenities for Pittsburgh’s public to enjoy. She was key in securing unanimous city council support for the first-ever interim planning overlay district for riverfront re-development.

Previously, Vivien headed The Boston Harbor Association for more than two decades, where her advocacy resulted in completion of more than a 41-mile HarborWalk public access system. It was at The Boston Harbor Association (now known as Boston Harbor Now) that she was recognized as a Barr Fellow in 2005. While serving and then chairing the Boston Conservation Commission, she was a strong proponent of a vibrant Working Port. Early on, Vivien focused public attention on climate change by initiating the first Boston Harbor Sea Level Rise Forum in 2010, and subsequently co-chaired the advisory committee for the City of Boston’s 2014 Climate Action Plan.

Vivien is a frequent speaker on climate resilience and development of urban waterfronts, and serves on advisory committees to Harvard’s Rappaport Institute for Greater Boston, and Beth Israel Deaconess Medical Center, a Harvard teaching hospital. Vivien is a mayoral appointee to the inaugural Boston Municipal Lobbying Compliance Commission constituted in June, 2019 to ensure good governance and greater transparency in lobbying activities on the municipal level.

Vivien is the recipient of numerous honors and awards, including an honorary degree from Allegheny College and is an honorary member of the Boston Society of Architects. A Boston resident, she has degrees from Barnard College and Princeton University. 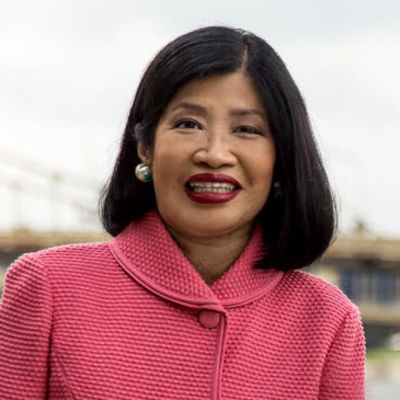