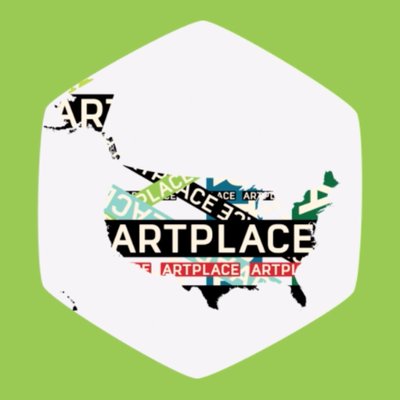 Why You Want an Artist on Your Team

Artists are leveraging their unique talents to transform communities across the U.S.

Earlier this year, Katarzyna Balug from Department of Play shared with us how artists have played an important role in Boston’s cultural planning process, Boston Creates. In addition to gathering public input through unconventional avenues such as bread-making parties, artists helped ensure that voices were documented, even if it meant printing residents’ brainstorming notes on the surface of a city-owned vehicle.

And Boston is not the only city looking to artists for help engaging residents and thinking creatively about how to solve its most pressing challenges. “When Artists are at the Planning Table” was a key topic of discussion at the recent national summit hosted by ArtPlace America. ArtPlace America, a 10-year initiative to position arts and culture as a core sector in overall community development and planning processes, has been supporting Department of Play’s work in Boston, as well as other inspiring projects across the country. They are also one of Barr’s first partners in implementing our new Arts & Creativity strategy in this emerging field, known as creative placemaking.

I had the opportunity to attend the summit in person and hear from an impressive lineup of artists, city officials, and nonprofit leaders about how creative placemaking is successfully manifesting in cities across the country. Artists are coming to the table to address a wide range of issues, which I learned more about during the next panel, “Artists Engaged in Public Safety, Housing and Public Health.” Below, I share highlights of these discussions, which were written and originally published by ArtPlace America. 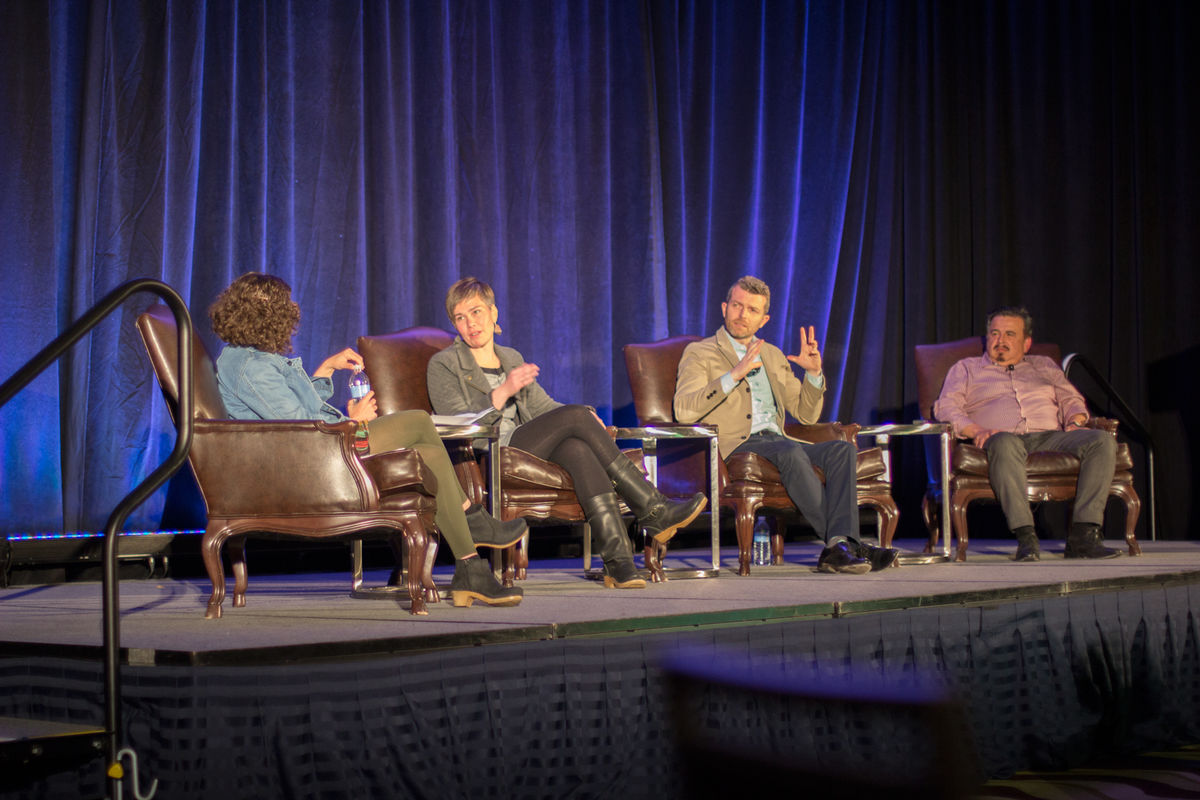 As we re-cap this year’s ArtPlace Summit in Phoenix, AZ, we’d be remiss if we didn’t highlight the two most talked about plenary sessions: “Creative Placemaking: When Artists are at the Planning Table” and “Artists Engaged in Public Safety, Housing and Public Health.” In his opening remarks, Jamie Bennett, executive director of ArtPlace America, called the lineup for the former panel “ideal,” saying, “For once in our lives we actually got it. We got the dream team.”

It wasn’t just the breadth and depth of knowledge and passion that came out of these panels that made them so popular with the attendees–each of our panelists shared utterly captivating stories about their work.

The “Creative Placemaking: When Artists are at the Planning Table” session began as most of the plenary sessions did: with each panelist introducing themselves and their work.

Jason Schupbach, director of design programs and visual arts division team leader at the National Endowment for the Arts, got things started by contextualizing creative placemaking within the scope of American history: “It took 100 years to build the public health field. We’re only 50 years into this game.” He insisted planners and developers adjust their vision by recognizing what an asset artists can be to their processes.

“The really special thing about artists and art organizations…is that they’re one of the assets that every single community has,” Jason said. “This is a naturally occurring resource in America… You have to take [them] seriously, just like you’d take a transit consultant seriously. It’s someone who’s going to help you with engagement in a serious way.”

Amanda Lovelee, the city artist for Public Art Saint Paul, is one of the artists actively doing that work in St. Paul, MN. Amanda likened her role in the city to a bee, actively pollinating with her art.

“I’m the bee, and Public Art St. Paul is the hive. Artists gather around the hive and dream and innovate…and then the city of St. Paul is the orchard. As the pollinator, I help make the city bloom and create these really strong reciprocal relationships between the city departments.”

For Amanda, her major role as a creative culture-bearer in St. Paul is to create projects which double as tools for engagement. One of her most successful endeavors, Pop Up Meeting, delivers popsicles via a bright red truck under the guise of inviting residents into community conversations.

“Last summer we held 17 meetings, we handed out 1,826 popsicles in exchange for 1,153 surveys. Each survey was specific to the project and location we went to. Out of that, 70% of the people we surveyed said they had never been to a city meeting before.”

We handed out popsicles in exchange for surveys. 70% of the people we surveyed had never been to a city meeting. Tweet This

Our final panelist was James Rojas, an urban planner and artist based in Los Angeles, CA. Like Amanda, James has created a unique model for engaging citizens in the development process through what he terms “the visual, spatial and emotional language of cities.”

“Most people can’t read maps and numbers make no sense to them,” James explained. “But they know what a city feels like.”

James asks people to use found objects (hair rollers, popsicle sticks, etc.) to build their ideal cities. “When you use art as not a product but a process, people can imagine, investigate, reflect and build,” he told us.

By asking people to think creatively about their environment, James believes we can more cogently translate the values of individual communities and then work to design projects that fit those values.

That theme of translation, of breaking down coded language and using art to simplify complex ideas continued through to our “Artists Engaged in Public Safety, Housing and Public Health” plenary session.

The session began with Jamie Hand, director of research strategies at ArtPlace America, announcing the release of two field scans which address two primary audiences: artists and other arts and cultural practitioners seeking to better understand and collaborate with a particular community development sector; and community development practitioners who are interested in how arts and culture might further their work. The goal is for these two audiences to develop a shared language and a collaborative set of goals, so that ultimately communities will benefit from the powerful, cross-sector synergies that we know to be a signature characteristic of creative placemaking work.

This was perhaps the most provocative panel of the summit, with crowd favorite Jorge “Piper” Ferreira, a sheriff for the Alameda County Sheriff’s Office in San Leandro, CA, kicking off the session by discussing his transformation from a kid growing up during the crack epidemic, into a rapper, and most recently into a cop.

Through creative work like his one-man play “Cops & Robbers” (Piper plays 17 different characters on both sides of an officer-involved shooting), he directly engages with both the community (performing the play in theaters and prisons alike) and the police department to instigate change.

“We can’t just focus on arresting more people this week than we did last week… We have to fight the forces that create crime. It’s just as honorable as fighting the crime,” Piper said.

Mel Chin, an artist and activist based in Egypt, NC, doesn’t shy away from uncomfortable situations either. After Hurricane Katrina, Mel went down to New Orleans to see what he could do to help.

“I discovered that 30–50% of the inner city childhood population of New Orleans was poisoned with lead before the storm and there’s no support for that,” he explained. So, he found a house where children had been poisoned with lead (“which leads to a life of inability of education and the capacity for behavioral violence”) and transformed it into Safe House—a type of art installation in the flooded NOLA neighborhood of St. Roch. 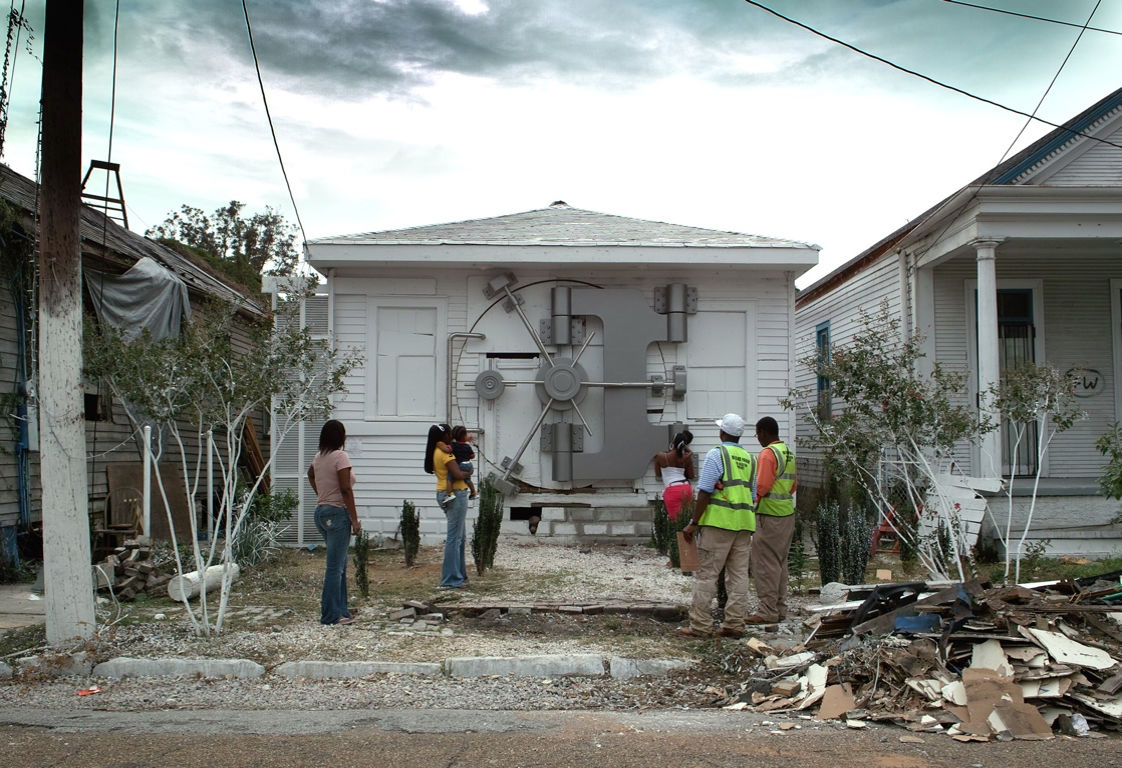 Mel spoke directly to other artists, urging them to choose projects that make them feel “compelled” to affect change. “It’s about being compelled because it makes no sense not to do something. And then you can apply the creative process to find the angle and procedure to bring about a catalytic possibility that didn’t exist before. Tweet This

The final artist on the panel, Elizabeth Hamby, discussed her efforts to merge public health initiatives with the urban landscape in New York City.

“Health is something that we experience as individuals, but the factors that produce health are very much collective,” she said. To that end, Elizabeth created Boogie Down Rides, a bicycling initiative that transforms the streets of the Bronx—“our largest public space”—through group rides, advocacy and training.

“In my city, there are differences of nearly 10 years in life expectancy between neighborhoods that exist just a few subway stops apart. Our zip codes determine as much as our genetic codes when it comes to our susceptibility to chronic disease like diabetes and hypertension. The shift we have to make is from thinking about people and place, to thinking about people in place,” Elizabeth said.

Each of the panelists create such different work in such discrete places. The session’s moderator, Sarah Calderon, managing director of ArtPlace America, couldn’t help but ask why each of the artists care about their work, why they care about opening themselves up to the public sphere.

“Creativity gives me wings,” Piper said. “I don’t have to play by all the same rules that the people from the worlds I come from have to play by because I have creativity.”

What better endorsement for including artists in the development process could there be?

ArtPlace America is a 10-year project to position arts and culture as a core sector of community planning and development by supporting creative placemaking across the country.