“If I made anyone here uncomfortable, you’re welcome.”

Three lessons in great communications from a philanthropy leadership conference.

Leadership is hot these days. Everywhere we look, there are new books, conferences, trainings, and talking heads sounding off on the topic. So, why is public trust in our leaders so in the pits?

Phil Buchanan, president of the Center for Effective Philanthropy (CEP), posed this question last week to an audience of foundation leaders at CEP’s biennial conference. The conference is geared to foundation presidents, CEOs, and board members — most of the 400-plus individuals in the room fit that bill. But they also tolerate a few hangers-on. And I am glad they do, as the learning, inspiration, and questions we grappled with over three days in Boston have relevance beyond the C-suite and boardroom, including in my domain — communications.

When I heard Phil’s question, I first thought, that’s a leadership — not a communications — issue. No matter how skillful, communications can’t fix bad leadership. We might derive a perverse pleasure watching an official spokesperson tap dance through trying to justify the unjustifiable, but their spin can’t make their boss rise in our esteem. Only actual leadership can do that. The show, not the tell.

Yet, undeniably, one hallmark of great leadership is great communications. And what became clear to me last week were at least three ways all great leaders communicate:

One hallmark of great leadership is great communications. Tweet This

When Bryan Stevenson — lawyer, executive director of the Equal Justice Initiative, and author of Just Mercy — opened the conference, he urged us to “get proximate” to the problems we’re trying to solve and the people we’re trying to help. This is important not only because it is the most effective way to reach our target audiences with our messages and solutions, but because it is the only way to understand well enough to actually help.

Whether out in our communities, in the office, or even in the boardroom, great leaders set a context for two-way communications and meaningful, authentic engagement that builds mutual understanding. Only then can all contribute their best thinking and aspirations and fully commit to the work of change.

We know there is a power in telling people what they want to hear. It wins clicks for bogus stories masquerading as news, votes for unscrupulous candidates, or grants for savvy nonprofits. Yet, we also know it is not a way to bring lasting, positive change. That takes courage to accept and communicate truths that not only “comfort the afflicted,” but “afflict the comfortable” — including those of us who work in philanthropy.

“Afflict” is the wrong word for how it felt watching Sarah Jones’s one-woman performance, The Foundation, at the conference. I was stunned by her depiction of a dozen different characters, reacting to the transfer of power from a beloved, progressive, and recently-deceased foundation founder to his conservative, financier son. Encountering inspired art can hardly be described as an “afflicting” experience. Yet, what Jones did so effectively was stir a constructive discomfort for her audience. “If I made anyone here uncomfortable, you’re welcome,” says one of her characters, a Native American grantee of the fictional foundation. This work of art held a mirror up to philanthropy’s inescapably idiosyncratic, often hubristic, and always power-imbalanced reality.

So did a panel of truth-tellers, including Sacha Pfeiffer (Boston Globe investigative journalist), Vu Le (executive director of Rainier Valley Corps and author of nonprofitwithballs.com), Linsey McGoey (sociologist at the University of Essex, U.K., and author), and Grant Oliphant (Heinz Endowments president and CEP board chair), with Jim Canales facilitating. Their insights were discomfiting to be sure. Yet, if philanthropy cares about effectiveness and change, we need to create space for our critics to let us have it — to tell us where we fall short, when our processes undermine, and when our actions betray our values.

If we don’t have the courage to create discomfort, we are only apologists for the status quo. And if the powerful aren’t uncomfortable, what change can be expected?

Great leaders communicate to inspire greatness in others.

Early in their careers, some great leaders are propelled by narcissistic drive. Yet, they only become great after breaking free of its grip. In the conference’s closing plenary, historian and Harvard Business School Professor Nancy Koehn atomized the leadership lessons of Ernest Shackleton’s ill-fated Antarctic expedition. Driven by ambition to be first to the South Pole by foot, Shackleton ignored the unwelcome counsel of local whalers who knew the southern seas were unsafe to cross. Days later, Shackleton’s ship was trapped in sea ice, stranding him and his crew in the middle of the Weddell Sea. Ten months later, the ship was crushed and swallowed into the chilly depths.

Yet, out of that desperate situation, Shackleton’s greatness as a leader began to manifest. He set aside his personal ambition to reach the pole and instead committed to the singular goal of returning all his men home safely. From that point, every aspect of his communications centered on “we,” not “me,” including how he used food and drink to sustain spirits, kept doubters and dissenters close, and insisted all share in even the most menial tasks. This all contributed to a powerful sense of agency over their collective fate, and their eventual safe return. 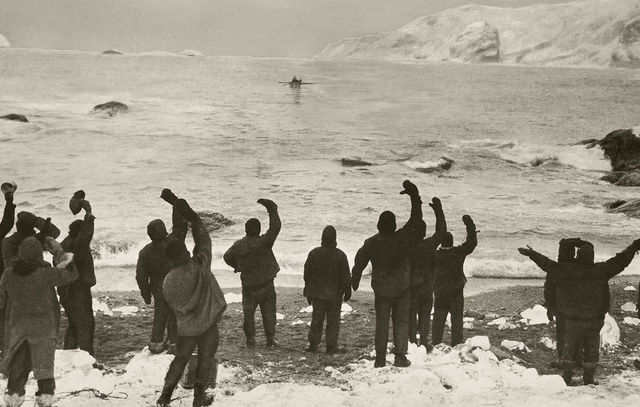 Shackleton successfully led all 28 members of his crew home safely.

The ultimate triumphs of great leaders depend upon them. Yet, these triumphs are not, ultimately, about them. And it shows in how great leaders communicate — seeking first to connect and understand, disrupting the status quo, and awakening greatness in others.

This blog was originally published on April 13 by The Center for Effective Philanthropy.

The Center for Effective Philanthropy (CEP)’s mission is to provide data and create insight so philanthropic funders can better define, assess, and improve their effectiveness—and, as a result, their intended impact. This mission is based on a vision of a world in which pressing social needs are more effectively addressed. It stems from a belief that improved effectiveness of philanthropic funders can have a profoundly positive impact on nonprofit organizations and the people and communities they serve.