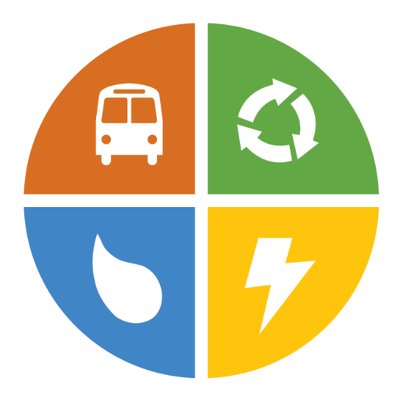 From Planning to Action: Preparing Boston for a Changing Climate 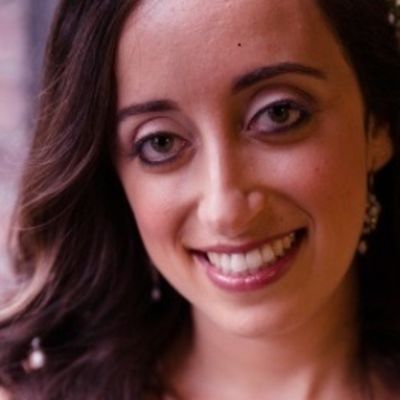 Mia Mansfield, program manager for the City of Boston’s Climate Ready Boston initiative, talks about the findings, next steps, and key lessons from Boston’s most recent climate resilience report.

The Climate Ready Boston report came out one year ago and laid out a roadmap for how the City can begin tackling the significant impacts it is projected to face due to climate change. This fall, the City released the first set of neighborhood coastal resilience plans that kick off its implementation. In our “Coastal Resilience Solutions for East Boston and Charlestown” report, supported by the MA Office of Coastal Zone Management and the Barr Foundation, we set out to better understand the specific flood risks these neighborhoods face, how those risks change over time, the short-term actions the City can take to protect residents, and the long-term vision for coastal resilience.

We started in East Boston and Charlestown because these neighborhoods face significant flood risk already, and their flood pathways are few and well-defined. We worked with the Neighborhood of Affordable Housing in East Boston, and a Steering Committee of many City and State agencies. As a direct result of the plan, Mayor Walsh announced immediate steps to reduce flood vulnerabilities in these two neighborhoods. In hindsight, what enabled this swift action was its focus on four key principles:

1. Get clear and specific about risks. 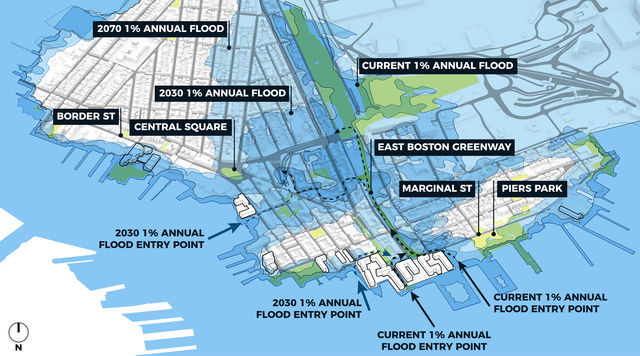 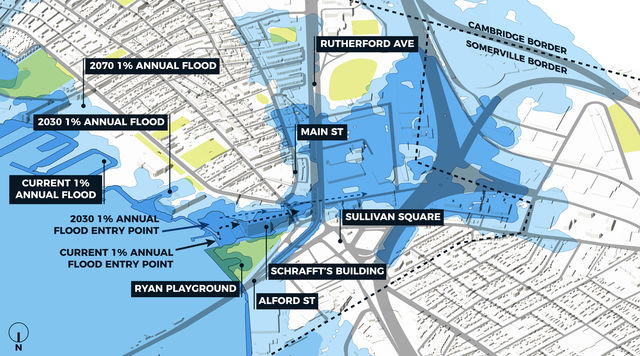 We identified specific actions we can take that work—not only to reduce flood risk, but also to bring many additional benefits to the neighborhoods. In both neighborhoods, the long-term coastal resilience vision is centered on redesigning the waterfronts to meet certain elevation targets while increasing green space, recreation opportunities, and access to the water.

3. Identify and invest in demonstration projects.

Mayor Walsh announced immediate steps to install a deployable floodwall across the East Boston Greenway, and incorporate flood resilience into the Sullivan Square Redesign project in Charlestown. These projects mean several million dollars in dedicated funding to Climate Ready Boston implementation and show the possibility of moving climate resilience from an abstract concept to a real project, coordinating across planning processes, and laying the groundwork for bigger and more complicated action in the future. 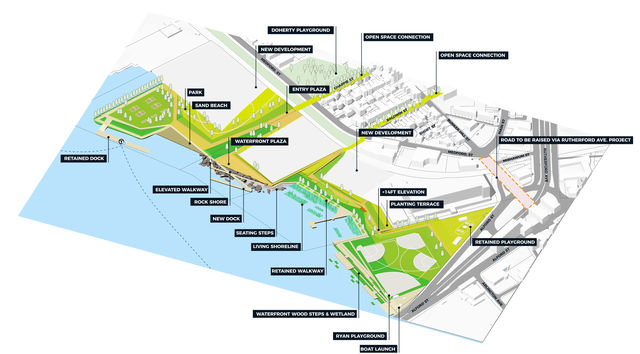 Our partnership with neighborhood groups like Neighborhood of Affordable Housing was critical to reaching more residents, getting feedback to the design team, and developing recommendations better aligned with community interests. We are working to improve community engagement across Climate Ready Boston. Last summer, we launched a community engagement initiative called “Climate Ready Boston Leaders” that trained 70 residents on Climate Ready Boston findings, and provided small grants to host community meetings and conversations on climate resilience. These Leaders reached over 500 residents through their events, and in January we’ll be recruiting our next cohort.

So, what’s next? In all of this work, our aim is to continue making Boston more resilient to climate change. Climate Ready South Boston is already underway, and the Moakley Park Vision Plan (in partnership with the Boston Parks and Recreation Department) will kick off this winter. Both projects present more opportunities to build climate resilience in ways that also create more accessible waterfronts, better parks and open space, stronger community partnerships, and safer neighborhoods for Boston.

And there’s more. The BPDA recently updated their Climate Resilience and Preparedness Checklist, that asks developers how they are preparing for 40’’ of sea level rise, and provides a Flood Hazard Area mapping tool with future flood elevations at the parcel level. And for the first time, the City announced a capital budget authorization for climate resilience planning.

As you can see, it’s been a big year with momentum building to keep this work moving forward. Climate resilience is an urgent and long-term issue for Boston, and progress depends on people from across the city getting engaged. To learn more about the City’s efforts to address climate change, visit Greenovate Boston.

Sign up for updates on Climate Ready Boston Leaders