Photo courtesy of the artist

With roots in the Dominican Republic, Chavez is an interdisciplinary artist who has based her art practice in the Boston area for over fifteen years. Her work is informed by her own personal narratives and responds to her identities as a Latina immigrant, artist and designer. She is motivated by the power of the creative process as an agent for positive change. Her collaborative works with community partners and commissions include public art projects in Boston, Cambridge, Chelsea, Lynn, Salem, Beverly, Danvers, Ipswich and Marblehead.

Chavez holds a BFA in Illustration from the Massachusetts College of Art & Design, and an Associate degree from Altos de Chavon the School of Design. Chavez has exhibited her work in solo and group shows including the Fitchburg Art Museum, Boston Children's Museum and the New Hampshire Institute of Art. She is the current Polly Thayer Starr Visiting Artist at the Isabella Stewart Gardner Museum and her latest mural project can be viewed at Northeastern University's campus on a 300 ft. wide wall shared with Ruggles train station.

In 2017, she completed a mural commissioned by Now and There Inc. on the Charles River Esplanade in Boston and another for the Punto Urban Art Museum. In 2016 she received a ‘Creative City’ grant from the New England Foundation for the Arts for Lemonade Stand an interactive art installation throughout the city of Boston in partnership with artist Elisa Hamilton. In 2015 through a Boston Foundation grant, Chavez was commissioned by the Design Studio for Social Intervention (DS4Si) to create a temporary public art installation called Color Up! in Dorchester, MA. The project invited the community to help design and apply temporary spray-painted patterns to surrounding areas of the Upham’s Corner train station as part of the Lighting The Line Project. In 2013, Silvia received a Massachusetts Cultural Council grant for her ‘Fresh Air: Portraits’ of Chelsea project; which explored the environmental and political aspects within air quality issues in Chelsea, MA and was also a finalist for the Brother Thomas Fellowship Award. For two years, Chavez served as a Steering Committee member for the City of Boston Mayor’s Office to help shape the Boston Creates cultural plan for the city. Chavez is currently an artist in residence at Boston Children's Hospital and continues her studio art practice at the Boston Center for the Arts in the South End.

In addition to her fine art practice, she is an award-winning design professional, working for over 15 years with high-profile companies and institutions such as the Museum of Fine Arts, Boston, the World Health Organization, the World Bank and the Bill & Melinda Gates Foundation.

You can see samples of her design work here. 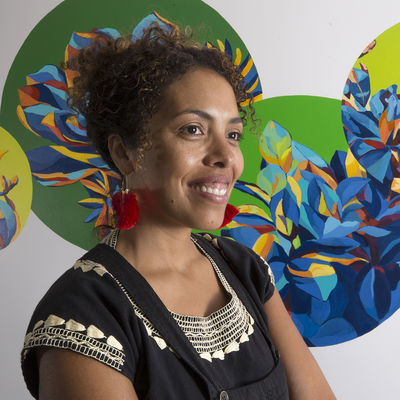